“I’ve got 2 pairs! Four! he exclaimed.  The joy was evident on his face. And in that moment, I realized he had uncovered a couple more kindergarten outcomes authentically through PLAY.  I had been showing a group of them how to arrange the cards from the game in an array so they would be able to recall the cards more readily. I’d been using math language intentionally as we played the game together; talking about pairs, lining up, counting the rows, first, second, third, fourth. After only a short time they began using it too, and then unexpectedly began talking about how many pairs they had in their hands, and also counting the total. Mathematics through play at its finest!

Later that day, I showed how I organized my cards in frames of five and ten to make them easier to count. They began to use the same strategy and then began pointing out to each other how many more one of them had than the other. “I’ve got four more than you, look, 5, 5, 10 and 4 more, 14. You’ve got 5, 5, 10, and 2 more, 12.” Listening to them joyfully comparing quantities reinforced once again for me that playing games is a really good motivator for children to make sense of math. 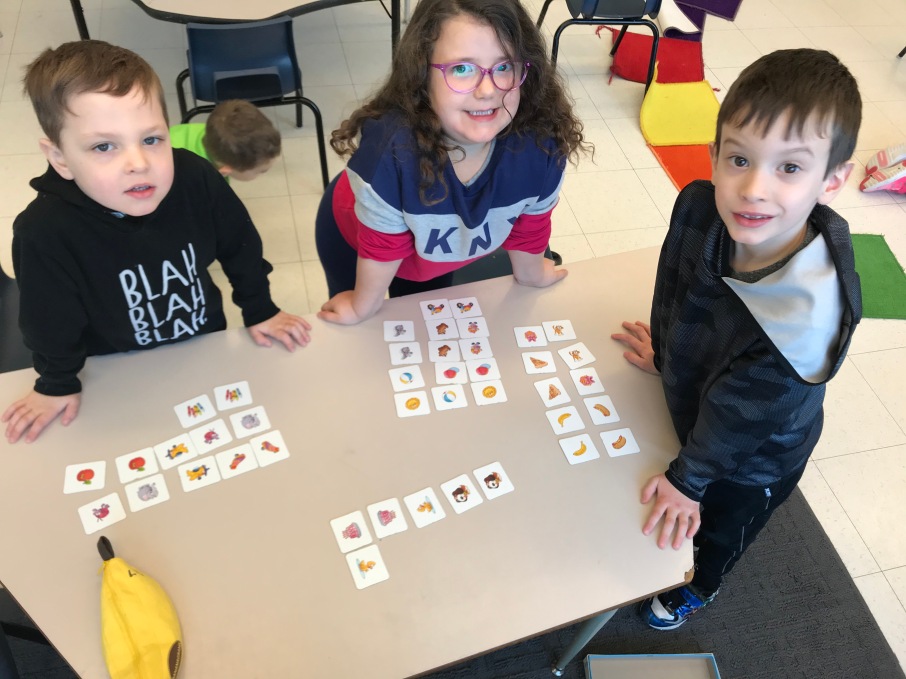 “Math is a thinking tool, not just something you learn in school.” I forget who coined that one, but it continues to resonate with me. To use math to accomplish tasks, figure things out, solve problems, and organize things is the essence of making math meaningful. Too often, mathematics teaching becomes the focus, with units and timelines, rote learning, isolated skill and drill worksheets filling up the day, while joyful math learning takes a backseat.

We’ve been having fun singing “Five bananas in banana tree” this week. The original lyrics are found in the Completely Kindergarten curriculum guide.  We’ve been changing up the song lyrics each day to include concepts like equality, addition, subtraction, counting on, counting back, and compensation. Finger plays and songs using fingers earlier in the year set the stage for now playing with the number of fingers on each hand and combining them. Figuring out the fingers is a struggle for some, but it’s  a good kind of struggle. I’m reminded of a quote from Singh and Brownell’s book Math Recess; Playful learning in an Age of Disruption that says:

This week, I’m challenging myself to think of some new ways to play with math with the children. I played a game last week with counting on that involved each child taking a turn saying the number that comes after and if it landed on “jump” in “1,2,3,4,5, jump”, one of their three frogs had to jump into the pond. Whoever had the last frog was the winner.  I’m thinking I can use some of the energy they bring to their projectile play to maybe use catapults or slingshots to launch items into something. Maybe they can use different coloured items to sort while counting and comparing.

Do I need to figure this all out beforehand and have everything premade and planned? No I don’t. Because planning, selecting and gathering materials, constructing launchers, and negotiating what they’ll do is going to uncover a whole lot of science, language arts,  and math outcomes. Win win.

Isn’t THAT what we REALLY want?

Education as it should be - passion-based.

A daily selection of the best content published on WordPress, collected for you by humans who love to read.

The best longform stories on the web

The latest news on WordPress.com and the WordPress community.